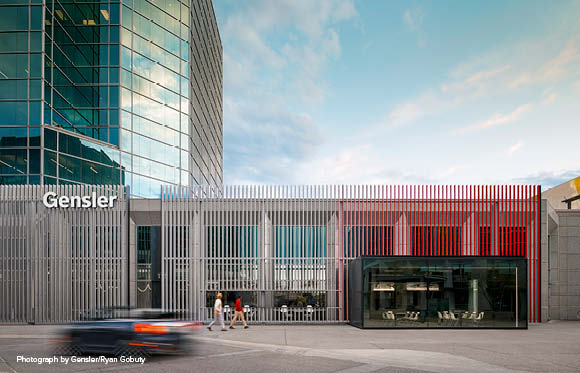 Though Gensler (Gensler.com) has been in Phoenix since 2002, the global architecture and interiors firm largely flew under the radar when it came to its own local office, despite having done high-profile projects such as the Phoenix Convention Center renovation and expansion, ASU’s Lattie Coor Hall and work for the likes of Bank of America, American Express, SRP and APS.

But if you happen to pass the Esplanade at 24th Street and Camelback Road, you’ll notice that Gensler’s new quarters are no longer tucked away in a downtown high-rise. Instead—highly visible from Camelback Road—is the firm’s modernist brise soleil, which stretches across the entire facade of their new offices. The structure is made of aluminum blades that are silver on one side and Gensler’s signature red hue on the other, emblazoned with the company name at the top, marking the entrance to the firm’s 10,000-square foot, ground-level space. “The piece is our exterior identity image, a billboard for the firm,” says Gensler Phoenix Design Principal Jay Silverberg, AIA, “It’s a dynamic element that firmly plants our flag in this location.”

This recently completed flagship location, soon to be home to 50 Phoenix Gensler employees (and growing), is, in effect, an evolution of Gensler’s nearly two decades in Arizona and reflective of the corporate culture that embodies collaboration and community.

Gensler first established itself in Arizona in 2002 with a design team that came from the Santa Monica office at the behest of client Bank of America, which had just moved into a tower at Collier Center in downtown Phoenix. The firm borrowed office space from its bank client and soon began fielding requests from other long-time national clients to do work in Arizona. By 2006, Gensler took up a whole floor at Collier Center. “That’s how this company grows—organically,” says Silverberg, who joined the firm in 2007. “We follow our clients and try to be of the place, to be contextual.”

A few years ago, the Gensler team realized “being of the place” meant the possibility of another locale for the office and began actively searching for a new space, something with higher visibility. They found it in an unexpected location—the old McCormick & Schmick’s seafood restaurant at the Esplanade shuttered since 2012. “It was an under-utilized asset and looked like a lawyer’s office, dark and filled with mahogany,” recalls Martha dePlazaola Abbott, Gensler Phoenix Principal and Managing Director, who spearheaded the office project with Silverberg and Rory Carder, NCIDQ, Studio Director and Workplace Leader for the firm’s Southwest Region. “It was a jewel waiting to be uncovered.”

The fact that the space was on the ground level and walking distance to many restaurants and Biltmore Fashion Square helped lure the firm from its previous downtown local, as well as the chance to embark on the sustainable repurposing of an existing building, added to the project’s appeal.

Though Carder, dePlazaola Abbott, and Silverberg guided the design, it was by no means simply a trio effort. “Gensler Phoenix was the ‘client’ in this case,” explains dePlazaola Abbott. “We are a collaborative firm, so we did a whole visioning workshop to get every employee’s goals and needs for the new space, all of which went into the design process.” The results of the input included such details as desks that pneumatically rise from sitting to standing, a composting option in the lounge, and a wellness room, where employees can shut the door to have a moment, quell a headache or, for new mothers, pump breast milk.

The new office layout includes a reception desk-less reception area, which, instead, reads more like an inviting hotel lobby, complete with Gensler-designed upholstered seating and a cappuccino machine. A long bookshelf unit (another Gensler-designed product) with flexible shelving and panels for presentations, books, and charrettes, separates the entry area from the work stations and the 40-foot long oak “dinner table” that can be used for everything from events and dinners to flexible work spots and meetings. A metal and glass cube, which pierces the front of the office, is the company lounge and kitchen. Behind the workstations is a surprise—two red velvet-upholstered booths, for lounging, working, and, perhaps, after-hours adult beverages. There’s an area for virtual reality presentations and a workshop—maker space—for 3D printers and model-making.
“We designed this all to be like a laboratory space,” says Silverberg. “The north-facing glass walls not only give us great natural light, but they also allow passersby to see what we are doing and how we work.”

Carder notes that the interior, with its white walls, black color scheme, and natural wood accents, also emphasizes a local connection. “We used copper accents for the accessories and the lighting feature at the entry to link to Arizona’s mining history,” she says, “and we worked with many local companies, like Urban Plough to fabricate some of the furnishings and 180 Degrees as the builder.”
Though it was the design process was well underway and the site was secured, the pandemic had its effect on the office project. “Gensler saw it coming through our worldwide offices in places like Shanghai and Bangkok,” says Silverberg. “The company flipped the switch on March 17th and thousands of us started working remotely that day.” In Phoenix, the Gensler team left their downtown offices to work remotely, while work continued on the new Esplanade space, albeit in fits and starts, due to pandemic slowdowns. But as Silverberg points out, the agile, flexible environment of the new quarters is perfect for a hybrid remote/in-person work structure that Gensler anticipates adopting.
As of press time, the firm has yet to call back the team to the Phoenix office, Carder notes, explaining that Gensler maintains certain health metrics must be met locally before an office can reopen. “We expect that to happen soon,” she says. “People miss the human connections and the in-person collaborations that happen in an office. Once we can open safely, the new office will give everyone a good reason to be happy to return.”

Current Gensler Phoenix projects, such as projects, such as The Kimsey, a residential mixed-use design in Scottsdale; Studios at Mesa City Center, and the Insight Headquarters in Chandler, will move seamlessly from monitors and Zoom meetings at home to the new office in Phoenix. The freshly completed space will no doubt help make working remotely more of a remote memory.