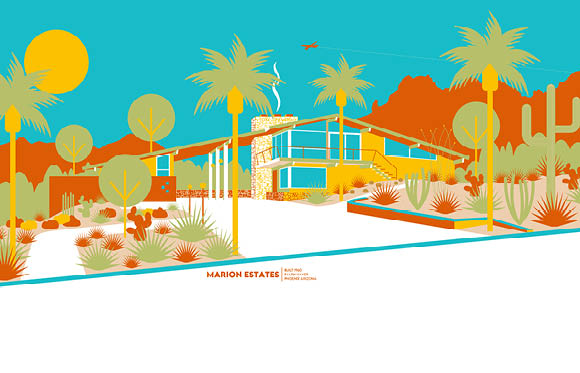 Through His Art, Architectural Designer Aaron Stouffer Preserves the Best of Phoenix Modernism.

Aaron Stouffer, 34, wasn’t around when CineCapri premiered “Star Wars,” when Helsing’s Coffee offered up cheeseburgers within its Googie-style building at Uptown Plaza or when Celebrity Theatre featured cutting-edge rock bands rather than legacy acts.

Nonetheless, the East Coast native became smitten with the Valley’s midcentury modern architecture after moving here in 2011 and began drawing up stylized, colorful prints of the buildings that touched an emotional chord with Arizona friends. It led him to launch Post and Beam, his company through which he sells his illustrations online and at retail locations like For The People in Phoenix. And did we mention he has a full-time job as an architectural designer at Tempe’s Architekton?

Stouffer’s origin story doesn’t necessarily indicate a later love of edgy, modern design. He grew up in rural Pennsylvania, the scion of several generations of farmers and dairy folk. He baled hay each summer and shoveled snow in winter to earn money. Architecture and design, however, did seep into his formative years. “My father did the floor plan of a house we built when I was in eighth grade,” Stouffer remembers. “That started me on reading floor plan magazines and drawing things on an 11 by 17 sketchpad. We also used to go camping a lot, and I would draw people’s campers and give the illustrations as gifts.”

After taking architecture classes in high school, Stouffer enrolled at Kent State, studying architecture. “It was total culture shock,” he recalls. “I was the first one in my family to leave farming, and I knew no one at the university. I almost failed out, but that was a wake-up call. I graduated on the Dean’s List with a BA and MA in architecture.”

But post-college jobs were scarce in Ohio. He loaded up a U-Haul and followed a friend to Phoenix, where he looked for a full-time architecture job while waiting tables. The break finally came when he met architect John Kane, founder of Architekton, at a party. “Tina Litteral of AIA Arizona hired me to be a bartender at a holiday party for architects,” Stouffer explains. “I like to joke that I got John Kane liquored up on eggnog martinis and got the job.”

But even with a rewarding, full-time job at Architekton, Stouffer, ever industrious, was looking to pay off a student loan and buy a house. He still waited tables in his spare time. But his long-ago talent at sketching campers caused him to change his part-time work. “A friend bought a Ralph Haver house in Phoenix,” Stouffer says. “I did an illustration of the house in a vintage style, as a housewarming gift.”

Before long, he began receiving requests for other house illustrations. He also met Shawn Silberblatt and Chad Campbell, owners of Modern on Melrose, a vintage shop in Phoenix, and, later, the design-oriented For The People store. The pair encouraged Stouffer to create a series of illustrations of lost examples of Arizona’s midcentury architecture.

“I love that style of architecture,” Stouffer says. “I started noticing how many 1950s and 1960s buildings were being torn down here. I wanted to do something to memorialize them and bring attention to our local architectural history.”

Working from old photographs, interviewing architectural historians, browsing archives and looking at historic Maricopa County aerial maps, Stouffer began researching each building. His illustrations, done digitally, are stylized, not literal, inspired by vintage advertisements and post cards, and often done in pleasing pastels. “I take liberties with the buildings,” he says. “For example, my Celebrity Theatre illustration has Piestewa Peak and the moon in the background, and Big Surf is surrounded by palms.”

Stouffer has expanded his turf beyond Phoenix, creating a large architectural image for the Loews Santa Monica hotel that hangs in its lobby and is used for notecards, and doing work in Palm Springs, memorializing iconic homes there. He’s also developing a line of dinnerware for a store there, that illustrates the city’s historic neighborhoods. Palm Springs Modernism Week? Stouffer will be there this year, selling art and showcasing his fully restored 1961 vintage travel trailer. “I’d love to branch out even more,” he says. “I could see images from Las Vegas, with all the great old neon signs and the old casinos.”

In the meantime, Stouffer keeps busy, by day at Architekton, and off hours doing his art. “I am not one to sit around. It fuels me to keep going, and knowing that people have so many memories and emotional connections with the buildings that I capture.”