How We Live Today 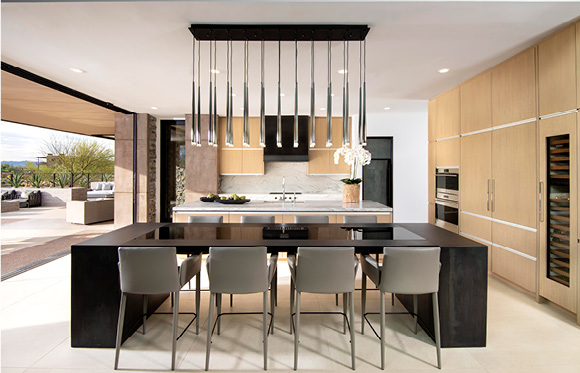 You might say that Rod Cullum has been around the building block once or twice. He and his wife, Kim, founded Cullum Homes (cullumhomes.com) at their dining room table in 1985. “We were lucky,” recalls Rod Cullum of his early years. “Right out of the gate, we were building high-end custom homes.”

Today, the Scottsdale-based design/build company has 65 employees and is involved in high-profile residential projects like Ascent at The Phoenician, Seven Desert Mountain, Ironwood Golf Villas, and homes at Silverleaf. There’s also a second-generation who has joined the business—the Cullums’ daughter, architect Lindsay Colwell, AIA, steers the design end of the business.

In his 36 years in business, Cullum has seen many home-building trends come, go and stay. “I’ve been in the business so long that I like to say running water was a trend I remember,” jokes Cullum. “I have seen it all.” Here, Cullum shares his thoughts on today’s trends and how custom home building has evolved in Arizona.

“In the 1980s, we went through a period where homes were large in scale just to be large,” Cullum remembers. “Foyers were oversized, and everyone was doing bedrooms so big that the furniture seemed dwarfed. Today, homes have better scale, and we’ve learned how not to waste space.

Architectural styles have also evolved, he points out, cycling through Spanish colonial revival motifs through Tuscan and so-called “Old World” inspirations from a few years back to today’s stripped-down modernism. “I think we’re trending back to Spanish or Santa Barbara-influenced architecture, but with cleaner lines,” he notes.

Material choices have also progressed. “Everything used to be clad in Carrara marble,” he says, “and we used to do a lot of dark colors, elaborate woodwork, and lots of textures. Now, it’s a simpler look inside, brighter, with natural stone and porcelain tile, which has really advanced.”
Colors, Cullum observes, have gone from darker brown/yellow/orange tones popular with Tuscan motifs to lighter color palettes, including cool grays and some warmer tones.

“We are definitely seeing more glass in our houses today,” Cullum says, “and less drywall. People want that connection with their landscapes and that seamless transition between indoors and out.”

As such, Cullum Homes has been detailing homes with sliding glass walls that connect to patios tricked out with outdoor living and dining areas, plus elaborate kitchens that go well beyond the basic barbecue grill. Outdoor entertainment areas are also big requests today. “It’s not that unusual for us to install an 85-inch TV on a patio,” he says. “We just need to make sure it’s screened from the neighbors.”

Cullum has seen kitchens become larger and more sophisticated, in addition to being part of the great room concept. With the popularity of open floor plans, though, more custom homeowners are opting for larger pantries and back kitchens, to keep the mess out of sight or to be used by caterers, says the builder. Double islands are also popular—one for cooking and one for entertaining and dining.

“We’re seeing a shift in appliances,” he says. “We’re putting in a lot more refrigerators, including specialty refrigerators for wine and beverages. Our clients don’t want as much freezer space as in years past. We’re also doing a fair amount of refrigerated closets, or walk-in coolers. Smart appliances, steam ovens, and ovens with sous vide capabilities are popular, too.”

“Bedrooms are smaller, and closets are bigger,” says Cullum. The master wing also often incorporates an adjacent workout area, large enough for not only a treadmill but for yoga mats, weights, and other equipment.

With the pandemic, Cullum has noticed an increase in requests for not just one home office, but two or more. The office, he says, used to be an after-thought. Not any more. “People want a space where they can close the door and get some work done.”
Bathrooms

“There was a trend toward vast bathrooms years ago,” Cullum recalls, “but today, they’re just the right size, with an emphasis on finishes and function.”

Clients are also choosing to skip the iconic, picture-perfect soaking tub. “Almost one-third of our custom homes are tub-less now,” he says. “Many people realize that they never use them. For people who enjoy tubs, we do try to place them by a window, if there’s an opportunity for a view with privacy.”

Walk-in showers the size of car washes are also out. “Those big showers might look great, but they’re not really functional,” he says. “No matter how much hot water you run, they can be cold.”

Surprisingly, the laundry room is shrinking, says Cullum. “We still do some larger laundries with two washers and dryers, which double as craft or hobby rooms,” he says, “but more of our clients want dispersed laundries—a washer and dryer for the master bedroom, for example, and then a smaller room for whole-house laundry.”

“Don’t buy a house with a two-car garage,” says Cullum with a laugh. Instead, his projects have room for three, four, or more vehicles. “We did one house in Silverleaf that could accommodate 14 cars.”

Cullum has been doing garages for “every-day drivers,” then adding display basements or spaces for the collector cars. Racks and lifts are also common in high-end homes. Air conditioning, bars, lounges, and dimensions roomy enough to park a Suburban are also what he’s seeing today.

“When we design a house, we always start with the garage,” he says. “It’s the first place you see when you come home and it should be a nice landing place.”

Virtually all of Cullum’s recent projects have smart home aspects—from lighting and climate control, to security and home entertainment. “Technology has really changed in the last few years,” he says. “It’s become more sophisticated and user-friendly, and equipment towers are smaller.”

Garages with charging stations for electric cars are commonplace. Covering all bases, some clients have asked for generators, Cullum notes, if the grid goes down due to storms or ransomware incidents.

Solar? Not so much with his clients, he says. “It’s a big investment, but my clients don’t have a lot of confidence in the years it takes to see a payback. I don’t see a lot of requests.”