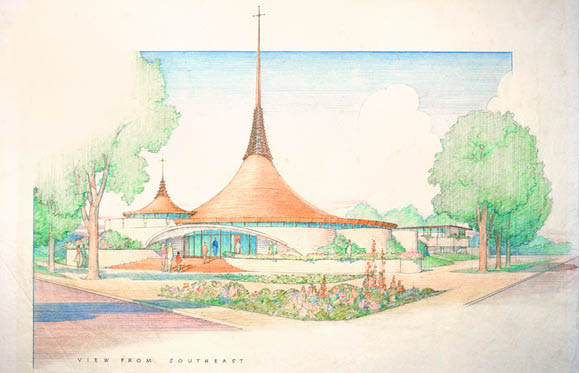 In Chandler, Organic Architecture and Design Archives Preserves the Work of Frank Lloyd Wright Protégés and Others.

For architecture scholars and enthusiasts, an unprepossessing storefront in downtown Chandler now houses a treasure trove of organic architecture drawings, models, photographs, correspondence and ephemera. The 1,000-square-foot building—once a beauty salon—now houses the vast majority of archives related to Taliesin Architects, the continuation of Frank Lloyd Wright’s architectural practice. The 60,000-something items in the Taliesin Architects collection are now under the care of the Organic Architecture and Design Archives (OA+D), which runs the Chandler facility.

How the Taliesin work wound up in Chandler and the seeds of OA+D are part of an intertwined story that had its start as a passionate hobby. Eric O’Malley, a suburban Chicago graphic designer and illustrator, became enamored with Prairie School architecture and Frank Lloyd Wright designs while he was a student. “I went to Millikin University in Decatur, Illinois,” explains O’Malley, “and there was an entire block of Prairie School homes—including a Wright design—right by the university that I was able to experience.” After he launched his career, the architectural connection from his university days sparked an interest in Wright and organic architecture, and O’Malley began to collect books, artifacts, drawings and ephemera on the architectural style, zeroing in on the work by Wright’s numerous protégés and other organic architects.

Through his collecting, O’Malley met two others with similar passions for organic design—William Blair Scott, Jr., a Kentucky architectural historian and preservationist; and Randolph C. Henning, a North Carolina architect and architectural historian. “We were superfans of organic architecture,” says O’Malley with a laugh. Through eBay, auctions, online sales and private sources, the three enthusiasts amassed a combined sizable collection that traced the beginnings of organic architecture with Wright and others, through the early 2000s.

“We all went down the organic architecture rabbit hole,” admits O’Malley, who spent spare hours studying the arcana of the field. “But by about 2012, the three of us started seeing the loss of these materials as the practitioners were passing away. Families of these architects sometimes tossed drawings, or collections were divided up and sold. And, most museums weren’t interested in these items if they weren’t directly connected to Wright.”

The three men decided that their collections should be accessible to scholars and architecture enthusiasts and, in 2014, formed the nonprofit OA+D. “Initially, the vast majority of what was in the archives was our own material,” O’Malley says, “but we were hoping that tax incentives would inspire more people to donate to the archive.”

They began publishing a journal to gauge interest in the archive, which was met with an enthusiastic response. They also set up satellite storage facilities for the collection in spots such as Los Angeles, Chicago and Lexington.

Some four years ago, through their connection to Taliesin West, the group was approached by the Frank Lloyd Wright Foundation to take the Taliesin Architects archives. The firm—originally known as Taliesin Associated Architects—was formed in 1959 to complete Wright’s work and to take on its own projects, with Wright’s son-in-law, architect William Wesley Peters, serving as the first principal. Based largely at Taliesin West, the practice employed scores of architects and designers, who worked on not only projects like Wright’s Gammage auditorium and the restoration of the Arizona Biltmore, but countless homes, clubhouses, commercial buildings, theaters and more. Vern Swaback, Charles Schiffner, Judith Testani, Elizabeth Rosensteel, Erik Peterson and others launched their design careers there; Ling Po, John Rattenbury, Stephen Nemtin, Tony Puttnam, David Dodge, Arnold Roy, Susan Jacobs Lockhart, Charles Montooth and Thomas Casey were Wright apprentices who remained with Taliesin Architects until it disbanded in 2003.

OA+D enlisted Chandler architect Michael Rust to become a board member. A graduate of the Frank Lloyd Wright School of Architecture and the former head of residential design at Taliesin Architects, Rust became part of the negotiation for the firm’s archives.

“This was a massive collection,” says O’Malley. “At one time, there were about 100,000 drawings in the collection. The Avery Library at Columbia University took about one third of them for their Frank Lloyd Wright archives, and ASU took about 1,800 that had to do with the university, so that left about 60,000 drawings.”

In summer 2021, the Frank Lloyd Wright Foundation reached an agreement with OA+D, and the nonprofit scrambled to find space to hold hundreds of files filled with not only drawings, but photographs and ephemera, not to mention models. Rust found the space in Chandler—just down a block or so from the historic downtown—and facilitated the renovation of the building to house the archives.

“The Taliesin Architects archives is now the single largest collection we have,” says O’Malley. “Getting that was a watershed moment for us. But because so many of the firm’s architects have remained in the Phoenix area, it made sense to keep it here.”

But the OA+D archivists haven’t just stored the massive collection in Chandler. With four board members, a volunteer and one contracted staff member, the group is working to organize the files and digitize as much as possible, a tedious but important task. Eventually, they hope to host public events and exhibits. In the meantime (and depending on the pandemic situation), the Taliesin Architects archives is available to view by appointment.

“We don’t just want the material to sit on it,” O’Malley states. “We want to provide access and services to scholars and former firm clients. This collection, and our other collections, are important and deserve attention. In Chandler, we want to be an asset to the design community.”