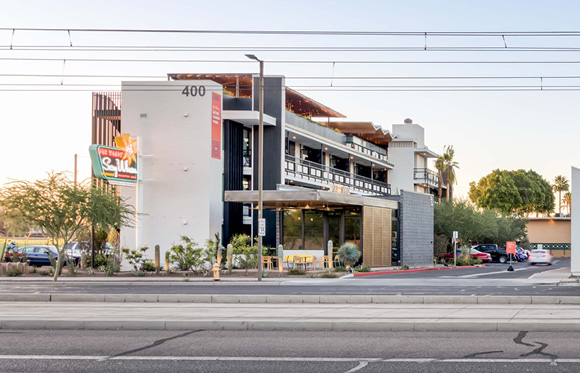 It’s early Friday afternoon at Rise Uptown Hotel (riseuptownhotel.com) in Phoenix, and the pool is already full of weekend revelers. The adjacent patio restaurant, Lylo Swim Club, is dishing out Spam musubi, huli huli chicken bowls and icy rum drinks. In the lobby, guests are being checked in and tempted by gourmet popsicle creations displayed front and center by the door. Upstairs, Don Woods’ Say When rooftop bar and penthouse is getting ready to open up for sunset drinks and bites.

In other words, the hotel and its food and beverage venues are humming along just as Lorenzo Perez and Jon Kitchell hoped they all would. The two Phoenix business partners spearheaded Rise through their Venture Projects (ventureprojects.com) redevelopment firm, known for breathing new life into local landmarks and creating such retail/hospitality hot spots as The Newton, Windsor/Churn and The Orchard in Phoenix and residential projects like The Douglas in Scottsdale, Alhambra student housing in Mesa and Oasis Twenty in Phoenix.

Kitchell and Perez, both Arizona natives, met when they were at Kitchell, a construction firm founded by Kitchell’s father, Sam Kitchell, in 1950. Perez, an ASU grad, started his career at Hunt Construction Group, working on the Bank One Ballpark (now Chase Field), before joining the Kitchell company to work on custom home and hospitality projects. Jon Kitchell didn’t initially join the family firm, instead establishing himself as a master craftsman with his own mill shop and, later, as an artisanal custom home builder. When the Kitchell company wanted to start a custom home division, the management tapped Jon Kitchell.

By 2007, Perez and Kitchell opted out of the large construction firm, instead launching Venue Projects to focus on “redevelopment”—not development—of uniquely Arizona properties and projects. “I was inspired by what Scott Lyons had done with the Hotel Valley Ho, which the Kitchell company remodeled in 2005,” recalls Perez. “I also happened to meet his father, Rusty Lyons (the late, visionary developer), who also encouraged me. So, I wrote a business plan and asked Jon to give me some feedback on it. His only comment was, ‘There’s only one problem—it doesn’t include me.’”

With that—and despite the fact that the Recession was looming—the two were off. “We launched as general contractors and had no office,” recalls Kitchell, “ and we held meetings in coffee shops. Our first actual project was a master bedroom closet for a home in Arcadia.”
But soon the pair came to do The Orchard, an old citrus nursery converted into a neighborhood restaurant and retail magnet, and Central Market, the official name for the complex where restaurants like Windsor and Churn are located. Central Market was a 1940s strip mall best known for being the home of Dee’s International Hair-Port, where the late Arizona Governor Rose Mofford had her trademark bouffant styled. “Rose Mofford made us promise that we wouldn’t kick Dee out with the redevelopment,” remembers Perez with a laugh. “We let her stay until she retired.”

As with all their projects, Kitchell and Perez are collaborators, paying close attention to what the neighborhood, its history and the neighbors themselves want to see. They’ve also partnered with numerous investors, architects and restaurateurs, including the likes of architect John Douglas, FAIA, and restaurateurs Kris and Craig DeMarco of Upward Projects. The results have been projects that fit into their setting and lift up the surrounding neighborhood.

For the Rise hotel project, the pair worked with Vintage Partners, John Douglas as architect of record and California designer Chris Pardo, then tapped cocktail expert Ross Simon to imagineer the food and beverage service. “The hotel was originally two office buildings built in 1959 and 1961,” explains Kitchell. “Architect Fred Guirey redid the first building and designed the second one. They were part of an area along Camelback Road known as ‘architects’ row’ because people like Al Beadle, Ed Varney and Ralph Haver all used to have offices in the area.”

The project stripped down the two buildings—which had seen better days—to their mid-century essences and converted office space into hotel rooms. A new pool, lush landscaping and the open-air pavilion that is Lylo’s links the two buildings, creating a unified property. The Don Woods’ Say When cocktail lounge is a nod to prominent real estate figure Don Woods, who wheeled and dealed from his penthouse office atop the 1959 building.

Perez and Kitchell, though, are not content to rest on their Lylo’s. Instead, they continue to focus on redevelopment and re-imagining of properties, and are zeroing in on several infill projects. In Gilbert, they are plotting the redevelopment of an old family dairy, complete with four iconic silos, as a hospitality setting. In central Phoenix, they’re building four prototype duplexes, meant to hit the rental sweet spot somewhere between affordable housing and luxury living. Designed by Phoenix architect Roberta Clay, the duplexes are inspired by the swooping forms of 1950s trailers, which Kitchell and Perez hope to translate to a nearby trailer park, under their gaze for redevelopment.

Today, with a team of eight at Venue Projects, Kitchell and Perez are thriving and continue focusing on gem-like, Arizona-centric projects. “We’re both counter-cultural,” says Perez, “and we like creative work. This has been a good ride for us.”