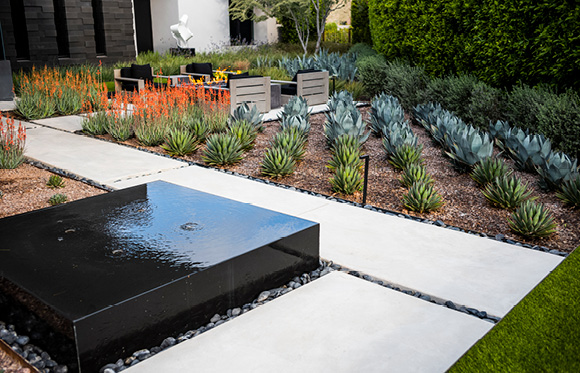 Jeff Berghoff is doing the landscape for The Global Ambassador, hospitality guru Sam Fox’s much-buzzed-about hotel and restaurant project under construction at 44th Street and Camelback Road in Phoenix.

That statement might give one pause. Berghoff, after all, has become the go-to landscape designer for estate homes, known for his lush, green and clipped approach to gracious gardens that surround homes in Paradise Valley, Arcadia, the Biltmore neighborhood, Silverleaf and beyond. “Yes, something like 99 percent of our work is residential, but we occasionally do a commercial project,” says Berghoff, who is also a landscape contractor. “Sam Fox is a friend and client—we’ve done a few homes for him—so it seems natural for us to take on his hotel property.”

The hotel isn’t the only thing on Berghoff’s plate. His Scottsdale-based firm offers not only design, but landscape installation and maintenance, with an average of 100 projects at any given time. His secret? Some 30 team members in the office and more than 300 out in the field, including those at satellite offices in Tucson and San Diego. Not bad for someone who former ASU architecture dean Reed Kroloff inadvertently pushed into the profession.

“I originally went to ASU to study computer programming—go figure,” says Berghoff, who grew up in the East Valley, “but I gravitated toward architecture. One day, Reed Kroloff sat me down and said, ‘you’re not an architect.’ I admit, I was pretty upset, but Reed pointed out that my work showed that I cared more about the site, the approach and the experience, rather than the building. He steered me toward landscape architecture—and he was right.”

Armed with a bachelor’s degree in landscape architecture, Berghoff went to work for Marcus Bollinger at Landscaping by André, a Carefree firm known for its desertscapes. “Chad Robert and I were there at the same time,” says Berghoff of the landscape designer who went on to launch his own company. Berghoff also worked at Gage Davis Associates, a golf and ski resort planning firm, under Wendell Pickett, who went on to form Greey | Pickett.

By 1997, Berghoff decided to go out on his own, setting up a drafting table in his townhouse. “I was 27 years old, and my wife was a grad student, living on student loans. How smart was that?”

But Berghoff was lucky—architect and ASU professor George Christensen was a friend and mentor. Christensen, who had his studio in interior designer Nancy Kitchell’s Scottsdale building, insisted that Berghoff also be given a space in the building. “It was literally a closet with a skylight, just big enough for a desk and a chair,” Berghoff remembers with a laugh. “But they put my name on the door, just below interior designer Paula Berg’s name, who also had an office there.”

Christensen went one step further, recommending Berghoff for the landscape of University of Phoenix founder John Sperling’s estate in Arcadia. “George designed the house, and it was on a five-acre lot,” says Berghoff. “The project went on forever, but it definitely launched my career. In fact, the property has now been subdivided, and I’m doing two of the new homes.”

The residential projects came quickly after that. Berghoff opted to add installation and maintenance to his service offerings early on. “I didn’t just want to do the design,” he explains. “I wanted to control the project so the clients got the best results. We don’t start something and not finish things—we want to do things right for the clients.”

The full-service approach has yielded Berghoff more than a thousand completed landscapes over the years, all over Arizona as well as places like Coronado, Newport Beach, Pebble Beach and North Carolina. He’s also become known as the “green” landscape designer, slipping in neat lawns, hedges and roses in areas of town where it’s appropriate. “I love the desert work that Christy Ten Eyck and Steve Martino have done,” he says. “Christy would refer me for projects at the Biltmore and Arcadia for clients who wanted a greener look, and I’ve done installations for Steve Martino. I became the ‘new green guy’ in town.”

While he’s known for his estate work—one residential project was for a property that is one square mile in size—Berghoff also handles small gardens. “We’ve done a lot of townhouse gardens, including many at Casa Blanca in Paradise Valley, which was a George Christensen design. We give clients what they need, and we work at the pleasure of our clients.”

In the meantime, Berghoff’s days are filled with site visits, client meetings, design ideas and staff interactions. “I don’t sit at a computer all the time. I wear dusty construction boots each day. But every day, I wake up excited to do what I have to do.”