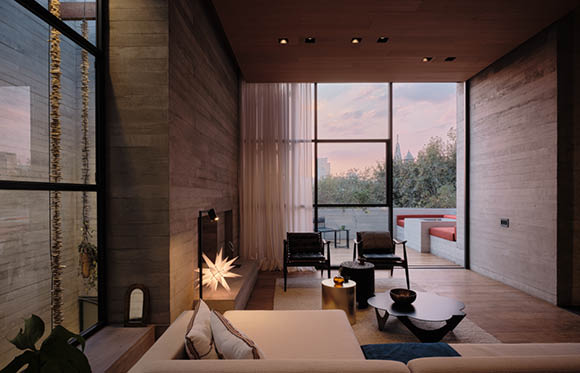 The Tucson-based lighting designer reflects on her career so far

Ask lighting designer Claudia Kappl Joy to work on a project and you won’t get a standard illumination plan, with general and decorative lighting, plus a lot of fixtures everywhere. “We don’t do layering,” says Kappl Joy firmly. “We do things as simply as possible to benefit the architecture and to create a memorable atmosphere for the user.”

That approach puts Kappl Joy and her seven-person firm, CLL-Concept Lighting Lab, in the realm of modernism when it comes to her approach to lighting design, be it for a home, a hotel, a public space or an art installation. And her career path? As a dyed-in-the-wool Northern European, she landed under the turquoise blue skies of Tucson, where she began her U.S. work in 2007.

Born and raised in Austria, Kappl Joy was into athletics and toyed with going into dentistry in her younger days, but a desire to do more creative work led her to getting a master’s degree in architecture from Austria’s Graz University of Technology. After being smitten with Sweden (“My chosen home country,” she says) during a high school exchange program, she worked on an architectural thesis program at the Ice Hotel in northern Sweden. “The project was really all about lighting and atmosphere,” Kappl Joy recalls. “It led to my staying in Sweden to get my master’s in architectural lighting design at the KTH Royal Institute of Technology, where the emphasis was on light and health.”

She went to work for a Stockholm-based lighting design firm that had projects in Sweden, Dubai, the United States and other locales. Trekking to one project in the remote desert of southern Utah, Kappl Joy met Rick Joy, one of three architects who designed the site’s modernist—and exclusive—resort, Amangiri. Professional and personal lives meshed, and she moved to Tucson, marrying Joy.

“Never in my wildest dreams did I think I would wind up in Tucson,” Kappl Joy says with a laugh. “It was an adjustment, but I love it.” At first, she kept things separate by working for another Tucson architecture firm, but during the economic downturn, that firm’s work dried up, while Joy’s studio still had plenty of projects in progress. “We decided to try it,” Kappl Joy remembers, “but even though I started CLL a few years later—and we’re in a separate building—both of our companies are still

Indeed, Kappl Joy’s CLL has handled the lighting design on many of Joy’s residential, commercial and public projects, but she has also worked with firms such as Lake/Flato of Texas, Faulkner Architects of California and Scottsdale-based Chen + Suchart. While homes, hospitality projects and commercial installations have been part of her firm’s oeuvre, she has also done more out-of-the-box projects, like doing the lighting for an exhibit at Scottsdale Museum of Contemporary Art (SMoCA), lighting a a set for a television show and working on a temporary public art display in Anchorage, Alaska, which involved creating thousands of snowballs, illuminated by small LED lights. Currently, she is also a lecturer at the University of Arizona’s College of Architecture.

During her 15 years in Tucson, Kappl Joy maneuvered a steep learning curve when it came to doing business in the United States versus Europe. “I had to adjust to the climate here,” admits Kappl-Joy, “and I soon learned that the sustainability conversation here was a lot different than it was in Europe, when it came to energy efficiency. Also, in Tucson, the product reps I worked with at first used to take on huge territories and many brands, so it was hard to get intricate, in-depth knowledge of the products. It forced us to research the products more deeply. Today, that’s different. We have some great reps who are very passionate about what they do.”

Kappl Joy points to the Princeton Station and Transit Plaza, a public work in New Jersey; the re-lighting of the plaza outside Tucson’s Hotel Congress and Polanco House, an apartment building in Mexico City, as some of her most significant recent projects. Currently under her gaze are Space Bazaar, a showroom in Scottsdale; a Taos residence and the One & Only Mandarina resort in Mexico, a sweeping project of some 178 buildings in a jungle-meets-the-sea setting.

With all her firm’s projects, Kappl Joy never waivers from her approach. “We work in extreme detail,” she explains. “We don’t just give out a concept. We do the planning, engineering, implementation and adjusting of the lighting. We monitor the budget so we don’t have to substitute something with lesser quality.”

“It’s a tight plan,” she continues, “but a wholistic approach. The end user is happy, and the clients get the best outcome